New York / Berlin, Dave Kutch, veteran mastering engineer and owner of The Mastering Palace in New York City, now trusts the MUTEC MC-3+ Smart Clock to handle clocking duties at his Manhattan mastering facility. In the past, Dave has mastered records for global hit artists such as Bruno Mars, Alicia Keys, Justin Timberlake, and The Roots just to name a few. 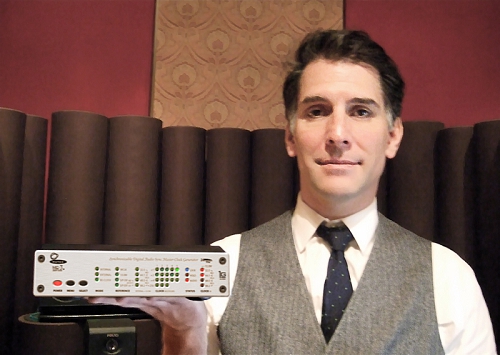 Dave reports: “I've always been fascinated by the sonic difference clocking can make on a converter and at the same time frustrated by the cost of the best clocks on the market. After an extensive test of the most common and the most expensive clocks on the market I stumbled upon MUTEC MC-3+ Smart Clock. Its price and sonic claims had me intrigued. I arranged for a demo and though I went in skeptical the sonic difference was too significant to ignore. Transients were punchier in the lower and upper frequency ranges and the overall top end was smoother. It delivers all of the sonic characteristics you expect from the best clocks available but without the staggering cost. Needless to say, I sold my previous clock and switched to the MUTEC.”

With over ten years of prolific mastering experience and an impressive client roster, Dave’s philosophy has always been to focus on exceptional sound quality and to never settle for anything less than best in class: “Great sounding records by great artists in a very sexy, elegant, productive environment, accompanied by the level of service found at a five star hotel. That was our mantra when I built The Mastering Palace and it is still our mantra today.”

MUTEC CEO Christian Peters adds: “MUTEC and our US distribution partner Sonic Distribution are honored to have Dave as one of our customers and to provide the best possible audio master clock for his work at The Mastering Palace.”

About MUTEC's MC-3+ Smart Clock
The MC-3+ Smart Clock was developed to significantly improve the audiophile quality of connected digital audio devices by clocking those with ultra-low jitter Word Clock signals or by aggressively re-clocking incoming digital audio signals. These abilities are based on MUTEC's proprietary 1G-Clock Technology providing clock signals with the lowest possible jitter. As a result, the re-clocked digital audio is of unparalleled richness of details and spatial resolution.

Additionally, the MC-3+ Smart Clock effectively regenerates incoming clock signals with higher purity than the source and thus improves already existing clock systems. By locking to so-called atomic clocks or GPS receivers, its timing accuracy can be raised to the highest possible level. And for live sound or OB truck applications, the MC-3+ features fail-safe clock generation in every operation mode at any time.