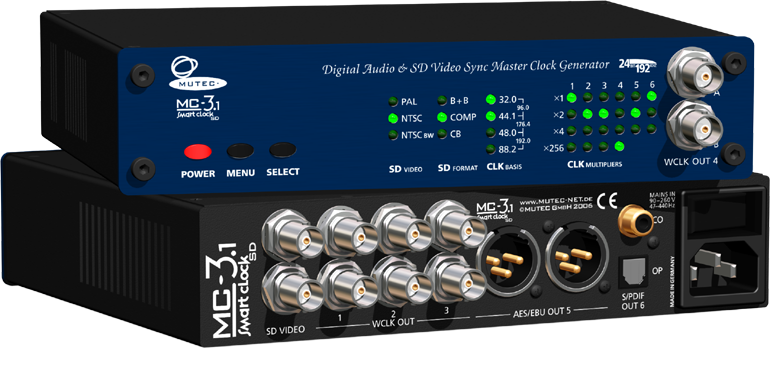 The MC-3 Smart Clock offers 7 basis low-jitter Word Clocks from 32.0 kHz up to 192.0 kHz, which are then independently distributed to four clock output pairs with multipliers x1, x2 and x4 for a maximum clock rate of 768.0 kHz. For the synchronization of older digidesign ProTools™ systems, the respective Word Clock frequencies can be transferred as Word Clock x 256 (also called Super Clock). AES/EBU and S/PDIF (optical + coaxial) blank frame sync signals are available from 32.0 kHz up to 192.0 kHz. Every Word Clock output pair as well as the AES/EBU and S/PDIF outputs can be set to a different clock rate, based on one common clock frequency. Thus, new devices with higher clock rates may be integrated into an existing studio set-up without difficulty. It is also possible to supply various workstations in the same room with different clock rates.

MC-3.1 auto-detects integer relationsships between the adjusted video standard and basis clock rate. This applies especially when PAL is selected as video reference and the basis clock rate (WCLK BASIS) is set to 48.0kHz, 96.0kHz or 192.0kHz. In that case, the AES/EBU and S/PDIF generators use the video frame to lock the Z-preamble of the AES channel block start, aligned to AES11-1997/2003 and EBU R83-1996.

The design advantage of the Smart Clocks is their high-precision frequency generator, from which all clock signals are simultaneously derived. As a result, the individual clock signals generated are synchronized to each other in phase, and hence feature the same frequency accuracy and time base! The frequency generation is accurate to <±1ppm and thus complies with AES 11, Grade 1, as well as broadcast specifications.