June 2015, Los Angeles. "Sol Invictus", the first Faith No More album in eighteen years, benefited from the sonic qualities of the MC-3+ Smart Clock at Maor Appelbaum's mastering studio in California. The native of Israel with a top-end mastering facility in Los Angeles never seems to grow tired of getting his hands on some of the biggest rock albums these days. 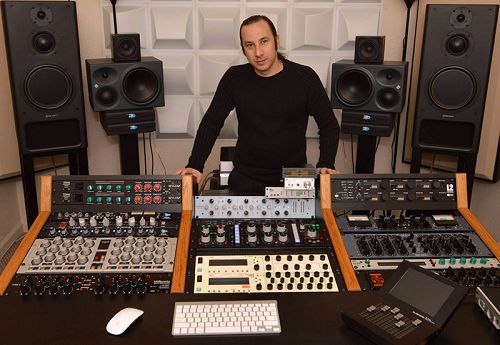 To date, Maor has over 20 years of experience in the audio industry. After working as staff engineer (mixing, recording and mastering) for famed record producer Sylvia Massy at Radiostar Studios in Weed, California, Maor moved to Los Angeles where he opened his private mastering suite. His impressive client list ranges from heavy-hitting artists like Faith No More, Yes, Sepultura, Rob Halford, or Anvil, to William Shatner and blues-rock legends Eric Gales and Walter Trout. It is to no surprise that Maor’s mastering room displays an extensive array of only the best in class audio equipment, both in the digital and the analog domains.

Maor explains: "I like the way the MUTEC MC-3+ Smart Clock affects my workflow. It sounds smooth and easy on the ear, very clear and detailed, and the stereo image is wide and open. This clock impressed me after less then five minutes of testing, so I bought it on the spot. I actually keep a spare of the MC-3+ around as a backup unit just to make sure I never have to work without it."

About MUTEC's MC-3+ Smart Clock
The MC-3+ Smart Clock was developed to significantly improve the audiophile quality of connected digital audio devices by clocking those with ultra-low jitter Word Clock signals or by aggressively re-clocking incoming digital audio signals. These abilities are based on MUTEC's proprietary 1G-Clock Technology providing clock signals with the lowest possible jitter. As a result, the re-clocked digital audio is of unparalleled richness of details and spatial resolution.

Additionally, the MC-3+ Smart Clock effectively regenerates incoming clock signals with higher purity than the source and thus improves already existing clock systems. By locking to so-called atomic clocks or GPS receivers, its timing accuracy can be raised to the highest possible level. And for live sound or OB truck applications, the MC-3+ features fail-safe clock generation in every operation mode at any time. World-class mastering engineers all over the world like Maor Appelbaum and Dave Kutch appreciate the reliability and sonic qualities the MUTEC MC-3+ Smart Clock provides to deliver the best possible results for their clients.