The Japanese author Hajime Sakaki reviewed MUTEC's "Tower of Power" consisting of the MC‑3+USB and the REF10 for the HiFi magazine Phileweb. He also had an in‑depth chat about the importance of clocking with the renowned dealer Hideo Kusakabe. Read our translation of the article now. 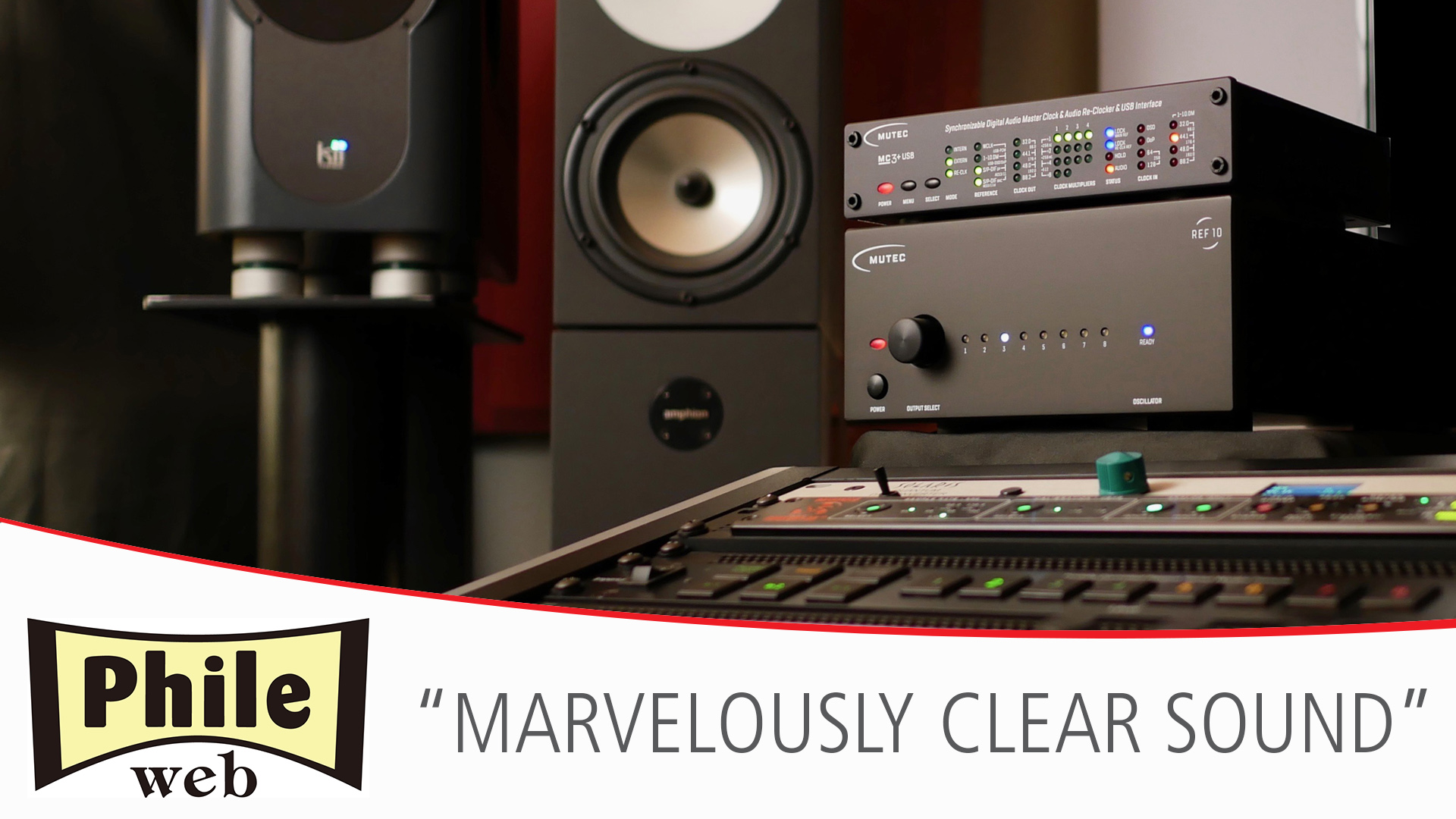 Introduction
MUTEC's MC‑3+ Smart Clock USB is equipped with the proprietary "1G‑Clock Technology", initially developed for professional studio applications. It provides multiple Word Clock outputs, audio re‑clocking via USB, and a DDC (digital‑to‑digital converter). Many DACs can benefit from the sound improvements thanks to an external, high‑quality clock generator.

The REF10, on the other hand, is a 10 MHz audiophile reference clock that can supply an ultra‑low noise, highest‑precision clock signal to multiple 10 MHz compatible devices. Based on the fact that the MC‑3+USB is now an officially certified "Roon Tested" device, we suggest upgrading to using a combination of Roon and Nucleus.

Innovative audio clock technology for professional applications is the key to audio bliss
For now 30 years, MUTEC is a highly specialized manufacturer of digital audio processors and clock generators based in Germany. MUTEC's audio clock generators are based on trademarked clock and re‑clocking technology that is highly renowned in broadcast and mastering studios worldwide. But the MUTEC portfolio also includes products used for audiophile consumer audio at home. Hence, we put the MC‑3+USB and REF10 to the test to examine their effects on the sound quality. 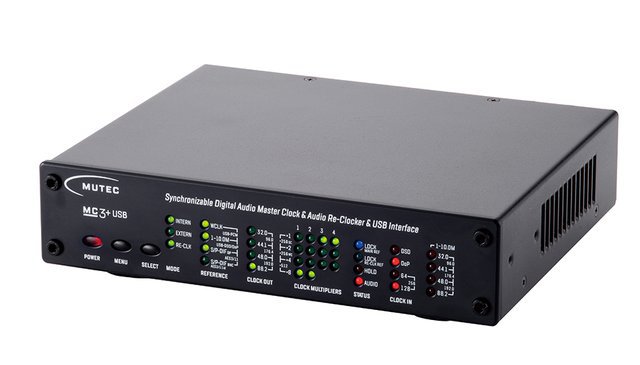 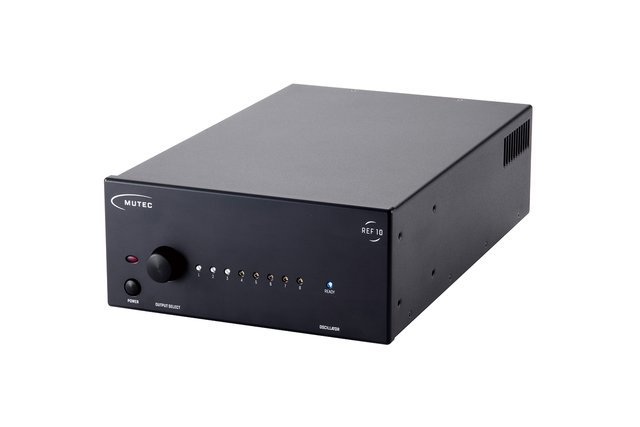 The MC‑3+USB was introduced as a "USB audio master clock generator", but it can also be described as a "USB‑DDC with master clock input/output and re‑clocking functionality". It is genuinely multi‑featured and is equipped with a wide range of connectivity harking back to its professional origin. The proprietary "1G‑Clock Technology" results in extremely low Jitter performance and lowest phase noise. It's important to point out that a DAC can benefit from the MC‑3+USB even if it doesn't have an external clock input. The device can also be used as a galvanically isolated USB‑DDC, which improves the audio fidelity when used with USB players such as PCs and music servers. 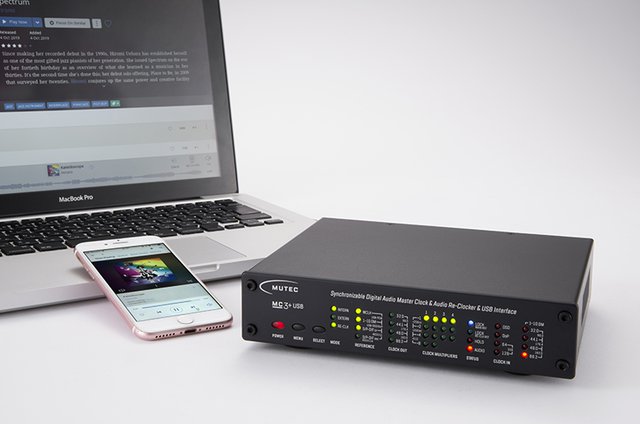 Pressing the MENU and SELECT buttons on the front panel changes the modes of operation. Select the "INTERN" mode to use the internal master clock and choose "EXTERN" to run with an external master clock, e.g. a 10 MHz clock. To activate the audio re‑clocking, add "RE‑CLK" to the selection. Picture attribution: Phileweb

The REF10 is a compact 10 MHz reference master clock. The main feature, apart from its industry‑leading phase noise performance, is that it provides multiple simultaneous clock outputs. Two 50 Ω and six 75 Ω outputs are available on the rear. Many audiophile products are now equipped with a 10 MHz compatible clock inputs, such as modern HiFi‑DACs and music servers. In that light, the REF10 is a highly valuable piece of equipment, because it can provide its highest‑grade clock signal to multiple devices at the same time. The REF10 also benefits from many MUTEC innovations, such as its exceptional, custom OCXO made in Germany, and the use of an ultra‑low noise, dual linear power supply.

Well, as I mentioned in the beginning, MUTEC has initially made its name with professional studio equipment. But the brand is quickly building a reputation in the HiFi consumer audio market as well. In fact, the MC‑3+USB has received the "Roon Tested" certification, further underlining MUTEC's new focus. I'm happy to report that the combination with Roon works flawlessly and as expected. 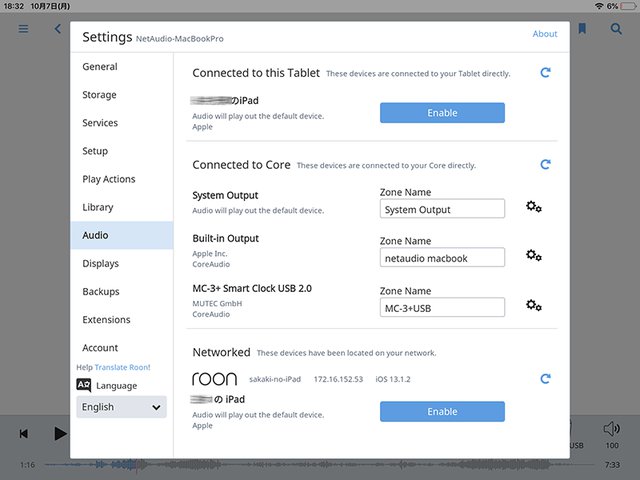 As announced in April 2019, the MC‑3+USB is now a "Roon Tested" certified device and can easily be integrated in a Roon based playback system. Picture attribution: Phileweb

More music, less noise
For this article, I tested the MC‑3+USB in two different wiring setups with Roon:

Both scenarios were then also tested and compared with the REF10 in place as an external 10 MHz clock to the MC‑3+USB. Additionally, I also combined an ESOTERIC K‑05XS with the REF10 to further examine the effect of the 10 MHz reference clock on its own. In this case, I used a Mytec Brooklyn Bridge as the USB DAC. 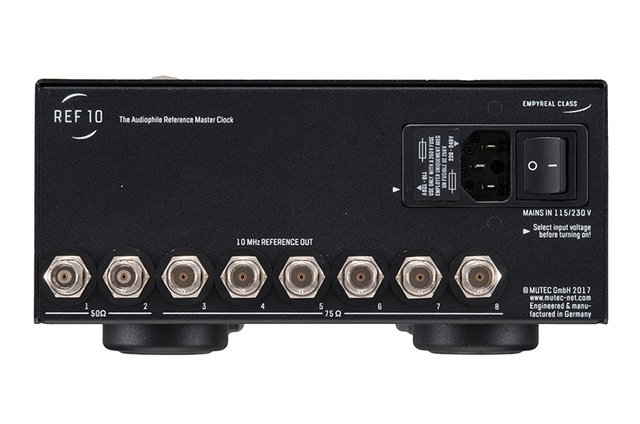 In the first case of a direct connection to a PC notebook, I was able to hear a more radiant sonic character with a distinct lack of coarseness in the high frequencies in particular. Compared with the playback without the MC‑3+USB, vocals sound more relaxed but still full and well‑rounded. Combined with the Nucleus, our second test case, the sound carries more weight and seems to expand into space more when using the MC‑3+USB. The fact that my impressions were slightly different, depending on the application, is noteworthy. But in both cases, the MC‑3+USB was able to suppress nuisance factors and provide a more precise, more transparent sound quality. Adding the REF10 amplifies the sonic improvements even further. I also noted a higher perceived loudness of the music.

In the third and last example (ESOTERIC K‑05XS plus REF10), the calm of the background resonates deeper while the appearance of the sounds becomes livelier than without the REF10. The sonic contours are a little softer without ever glaring unpleasantly. The K‑05XS sounds superb on its own, but adding the REF10 revealed that there was still room for improvement. This effect certainly highlights the exceptional qualities of this audiophile reference master clock.

Manufacturers and brand products rooted in the highly‑respected professional market can absolutely prove their worth in high‑end consumer audio. Fortunately, many audiophile fans have already learned this, and MUTEC's MC‑3+USB and REF10 further support this claim. Considering the simple integration and superior flexibility that these two devices provide, I'm sure that many HiFi systems benefit from MUTEC's clock generators.

More three‑dimensional depth and presence of instruments
Hideo Kusakabe is the owner of a dealership specialized in high‑end consumer audio in Hachioji, Kusakabe Denki, Japan. It's a store that for years, has been highly by customers committed to high‑quality music playback and who desire to choose from a wide range of analog and high‑res digital audio products. 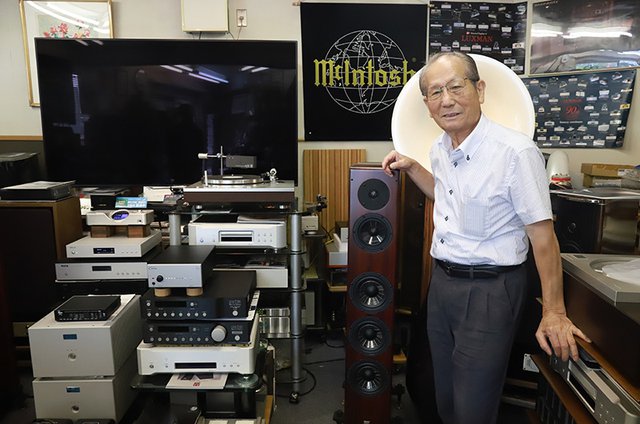 Mr. Kusakabe, initially an engineer for the Victor brand, worked as a support and service employee. He was often working in close communication with customers and would handle repairs and service requests. When he first opened a store in Hachioji, it was a simple store for domestic appliances. Towards the end of the 1980ies, though, he decides to reinvent his business as a HiFi consumer audio store, a business decision that proved to be very successful.

The store itself is filled to the brim with cutting‑edge products and vintage treasures. This is a place where exceptional consumer audio is the daily business.

Mr. Kusakabe is fully aware of the importance and benefits of audio clock generators for digital audio. He actively educates customers who buy NAS devices, CD transports, and streamers about audio clocking. MUTEC products, in particular, are top reviewed and very popular among his customers. It's no question that the MC‑3+USB and REF10 are always in stock and ready for a demo.

In the demo system, the REF10 is connected to the ESOTERIC CD‑Player K‑05X. The improvement in the depth of the sound stage and the presence of the instruments is almost overwhelming. Picture attribution: Phileweb

Kusakabe has many customers who are shopping for expensive CD players made by ESOTERIC. The CD players and DACs by this brand all are equipped with an external 10 MHz compatible clock input, which makes the REF10 an outstanding upgrade option.

"At 300.000 Yen, the REF10 is reasonably affordable among the 10 MHz reference clocks, but it yields a significant audible sonic improvement. Of course, some customers prefer to stay within the ESOTERIC product range, but I always encourage them to listen first and try it out on their own. In the end, many customers switch to using MUTEC." 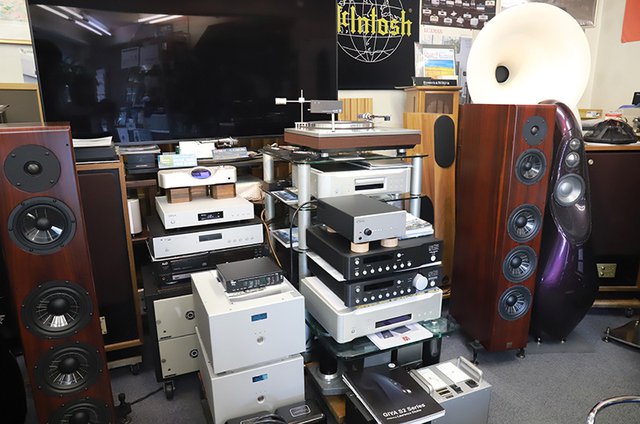 Concerning the sound quality improvements when adding the REF10, he notes: "The freshness and presence of each instrument within the three‑dimensional depth is improved and articulated." Kusakabe stocks an abundance of classical music records, notably the Remastered SACD series by Esoterique, since Mr. Kusakabe is a classical music enthusiast. Using the REF10, the instruments sound more present, and the sound stage is clearly improved as well.

The MC‑3+ Smart Clock USB, with its re‑clocking mode, is highly recommend as a sound quality improvement for DACs and CD transports that do not have an external clock input.