MC3+USB / REF10: Extensive Review in Down Under

Products from MUTEC Germany are also very popular on the other side of the world!

The renowned audio magazine SoundStage!Australia tested a combination of the multifunctional interface/clock generator/reclocker/format converter MC3+USB and the audiophile master clock REF10 in a very comprehensive manner. For this review the two MUTEC components had to prove themselves in a very challenging environment. 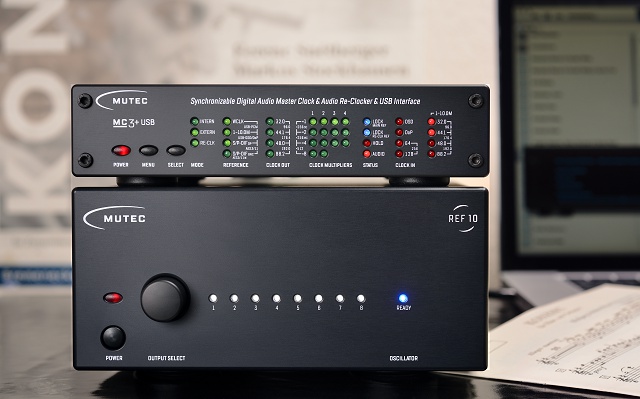 The author Edgar Kramer uses a 432 EVO server, which sends all audio signals to a Totaldac d1-direct DAC. This setup is priced well above 20,000 dollars and has a very elaborate USB technology already.

In this extreme high-end setup, Edgar Kramer felt the sonic impact of the solo MC3+USB to be slight at first, but noticeable:

With a highly-tuned and exceptionally well executed USB implementation, the MC-3+ USB proved a tricky customer to pin down. Improvements were often subtle but, when there and heard, they made a worthy contribution.

In contrast, the effect of the MC3+USB was far more significant in the case of the Yamaha CD-S 2100 CD player, which was used as an alternative to the server/DAC combination mentioned above.

The positive impact of the MUTEC devices in this ambitious digital audio system of the SoundStage!Australia reviewer became even clearer when the flexible MC3+USB was joined by the dedicated REF10 reference master clock:

It was satisfying to hear the REF10’s contribution to the system’s music-making powers. As stated above, the Totaldac d1-direct is a supremely capable DAC with a very high quality clock of its own. Introducing the REF10 into the signal path showed some complimentary sonic aspects to the overall presentation. For starters, the soundstage deepened noticeably. [...] Image positioning was maintained extremely accurately across the sonic field but, as mentioned above, with a deeper spatial perspective. In fact, in my listening notes I made mention of an improved sense of image presence, a more defined outline to instrumental positioning. [...] Another observation, although subtler than the soundstage depth noted above, was an increased level of low frequency micro-detail. Bass displayed enhanced textural content, where the bow’s rosin or the double bass’ low resonance contained more nuanced detail and transient information. There was a slightly sharper attack – and that’s saying a lot because in that aspect (and in oh-so-many facets of sonic excellence) the d1-direct DAC is an unparalleled champion. In other words, it’s no mean feat for the REF10 to augment that particular quality.

Editor Edgar Kramer also paid special attention to the fact that the MUTEC products provided their service in a very authorative manner:

In parallel to its MC-3+ USB stablemate (and also in conjunction with), it’s worth mentioning again the faultless way in which the REF10 operates. Once synch is established, the unit locked-in without glitch every single time. Whether you powered down from its fascia on/off option or via the main switch in the rear, you can bet your house you’ll have music in seconds. No hiccups, no stumbles. No clicks, no pops.

These multi-faceted positive experiences led SoundStage!Australia to this verdict about the two components from MUTEC:

The MC-3+USB is a superbly engineered component which does not detract from the music while providing faultless operation and a thorough preservation of both the digital signal and the music information contained within it. While its contribution was subtle in the context of my system, that in itself is an achievement. Inserting it into the signal path will not detract, impede nor negatively influence the music in any way. A mid-level streamer/music player, and even many high-end models, which adopt a standard- module USB output, will benefit from the MC-3+ USB’s transparency and neutrality.

The REF10 showed its muscles more overtly and is befitting of the best high-end systems. Again, there were no omissions, degradations or noticeable depreciations from the music. On the contrary, it provided a worthwhile extension to the sonic picture, especially in terms of soundstage depth which stretched further behind the speaker plane. Micro-detail was also somewhat refined and sieved through with purity.

We are very pleased that the exceptional quality of the MUTEC devices MC3+USB and REF10 has now also been confirmed by a profound authority in Australia.

Learn more about the MC3+USB

Learn more about the REF10

Read more feedback and reviews about the MC3+USB

Read more feedback and reviews about the REF10

Find an overview of all international distributors here