The positive influence of an interface from MUTEC on the sound quality of computer-based audio systems is undisputed. It is clearly confirmed again and again by customer feedbacks and reviews in the audio press. But the convinced MUTEC user Peter MacTaggart goes several steps further: He uses four MC+ and four MC3+USB, for a total of eight of these audio re-clockers!

The music lover with 25 years of professional experience as a sound engineer at live concerts and studio recordings is enthusiastic about the result that is triggered in his elaborate audio setup by the manifold MUTEC components:

The result almost leaves me speechless. I have heard a lot, but I had never achieved such an airy sound image. The soundstage imaging is wider, deeper, even cleaner. There is absolute silence between transients. Any kind of noise and coarseness have disappeared. The bass reaches down deeper. The music touches me much more deeply.

Following three, partly high specialized audio computers the eight MC3+/MC3+USB devices are cascaded via AES/EBU. This eight-fold configuration repeatedly re-clocks the data flow from each MC3+ to the next MC3+, so that in the end a completely time-correct, jitter-free signal arrives at the digital/analog converter.
This is because each subsequent MC3+ receives an even cleaner signal due to this repeated processing. Therefore each device has to perform less and less control or correction work.

It is like digging for gold: each new cleaning process brings a purer result to light. With those significant effects on the sound quality as described by Peter MacTaggart. In this respect, connecting several MC3+ and/or MC3+USB interfaces in a row proves to be an excellent way to optimize the quality of a digital audio system step by step.

Mr. MacTaggart's setup received a further boost in quality when he added the REF10 SE120 in a customized version with eight 75 Ohm outputs. This reference clock generator now supplies the MC3+/MC3+USB devices with clean 10 MHz clock signals. The verdict of the convinced MUTEC user speaks for itself:

Peter MacTaggart is by no means the first MUTEC customer to achieve positive sonic improvements by cascading MC3+ units. Please note: it doesn't always have to be eight! We have received a lot of feedback from users who achieve amazing results with just two devices. IT & Professional Audio consultant MacTaggart, on the other hand, may be considered someone who maximizes the possibilities of digital audio reproduction in every possible way.

For inspiration, here's an overview of his extraordinarily complex setup: 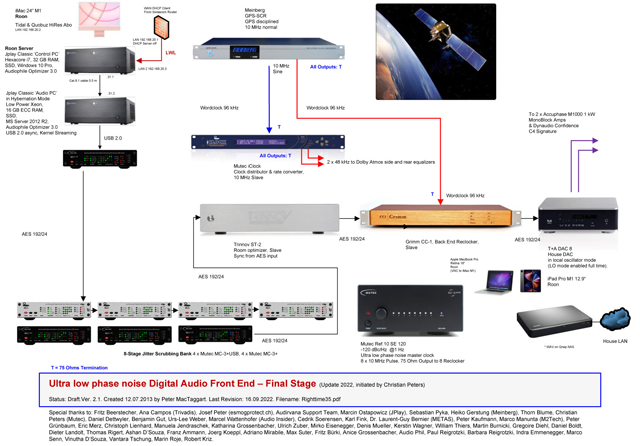 Update August 2022
In his role as an audio consultant, Peter MacTaggart recently installed a setup with eight cascaded MUTEC MC3+USB at a customer's facility in Lucerne, Switzerland. The audio interfaces, which are connected in series, are centrally fed by a custom-built MUTEC REF10 SE120 via eight 75 Ohm outputs with an exceptionally noise-free reference master clock. Especially in such an extremely sophisticated high-end system, the outstanding effect of this MUTEC combination on the perfect reproduction of digitally stored audio sources becomes obvious.