Since the release of the Windows update utility in July MUTEC has received a tremendous positive response from customers who have eagerly updated their devices:

"It appears the V1.10 firmware update enhances the sound quality and makes using DSD to PCM playback better. Audirvana Plus usually does the conversion for non-DSD enabled DAC's and the method the MUTEC unit now implements is superior to that of the software. Thank you for sending the update. Much appreciated!"
- Kevin O'Brien, Your Final System, USA

"Today, my music is such a pleasure to listen to, with a truly beautiful analog-like audio signature. The improvement in my audio system with the new V 1.10 firmware is so dramatic and significant, that I am having a difficult time turning off my system every night. The timing errors that were fixed with the new clocking algorithm are certainly not going to be missed. The audio running through the MC-3+USB is now crystal clear and as smooth as 'warm butter'. I am undoubtedly a huge proponent of your product now - I just wish that I had been able to update the firmware many weeks ago!"
- Brent Miller, USA

MUTEC CEO Christian Peters comments: "The MC-3+USB is very popular among audiophile customers using the device for USB playback from Apple Macs. As a class-compliant device this is particularly simple on a Mac since no drivers need to be installed. We are extremely proud to now offer a Mac-compatible app allowing our customers to keep their MC-3+USBs up to date with equal convenience."

As a reminder: the new V1.10 firmware not only introduces several functional improvements, it also presents a significant step-up for the already exceptional sound performance of the MC-3+USB.

The MC-3+ Smart Clock USB can now be updated on both Windows PCs and Apple Mac computers. Units updated on a Windows machine will still run on a Mac and vice versa. Just like before, the MC-3+USB functions as a class-compliant audio device without the need for additional drivers. A high-performance, high-stability driver is available for Windows PCs.

Once again the firmware release package will contain several update files and a comprehensive guide taking customers through the process step by step. This is a simple and quick process that does not require special skills or computer knowledge. Both the Windows drivers and the respective firmware update packages for Windows and Mac are available for download on the MUTEC website (www.mutec-net.com).

The firmware update and the availability of the Mac app further strengthen the MC-3+USB's position as one of the leading DDC (digital-to-digital) USB interfaces and re-clocking devices. Just this last May, US-based audiophile expert Kevin O'Brien already called the MC-3+USB a "no-brainer as it surpasses all the others in the performance AND convenience" in this USB converter shootout. 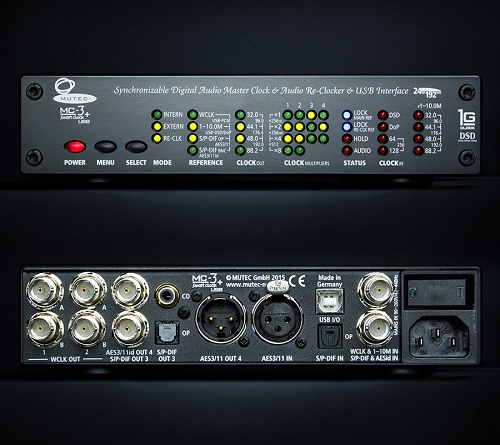 The rear panel of the MC-3+USB underlines the unit’s superior flexibility and range of connectivity options.

MUTEC products are installed in leading-edge broadcast and television stations, well-respected recording and mastering studios as well as renowned musical theatres, opera houses and universities all over the world. The new line of audiophile consumer products takes our experience from the broadcast and pro audio world into the listening room at home to provide an unprecedented music experience.